The Chains of Pornography Addiction: How it harms marriages and how to heal the damage 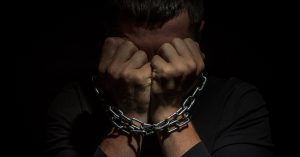 A wife pokes her head into her husband’s home office late one night and sees something she never imagined she would see.

A husband comes home unexpectedly and notices his wife’s phone on the counter. It’s on and displays a website that shocks him.

Pornography has invaded these marriages.

How can spouses experiencing pornography addiction break its chains and free their marriage? The Lord offers a place of rest and healing, a place of forgiveness and mercy. All they have to do is reach out for it.

An offense against chastity

The Church has had a clear stance on pornography since the beginning. It is an offense against chastity. Jesus himself equated watching pornography with adultery.

“But I say to you, everyone who looks at a woman with lust has already committed adultery with her in his heart.” (Matthew 5:28)

Some might think, “Well, that really just refers to what you do with a real person.” But notice the word “looks” in Jesus’ words. Adultery is not just about a physical action; it’s about the thoughts we allow and then dwell on.

In the Catechism of the Catholic Church (CCC), pornography is listed with other offenses against chastity such as prostitution, rape and fornication.

“Pornography…offends against chastity because it perverts the conjugal act, the intimate giving of spouses to each other. It does grave injury to the dignity of its participants (actors, vendors, the public), since each one becomes an object of base pleasure and illicit profit for others. It immerses all who are involved in the illusion of a fantasy world. It is a grave offense.” (CCC 2354)

Pornography use is a grave offense against God, but when it happens within a marriage, it’s also a devastating betrayal for spouses.

“The use of pornography is extremely harmful to the human being using it, as well as to the partner in the relationship,” says Father Kevin O’Dell, pastor at St. Therese Parish in Sioux Falls. “It causes huge marital problems and it causes situations where people are simply at a place where they just become addicted to an image rather than a real person. And so they don’t live the full sacrament of marriage or the full realization of what it is to be a Christian human being in our culture.”

Our Lord wants more for us than the sin the world often presses on us, especially when it comes to marriage. He created marriage as a sacrament and the family as an image of the Trinity—a true gift from our God. When any addiction worms its way into a marriage, the sacrament can be damaged and the family pulled apart.

Pornography consumption can undoubtedly become an addiction, and very quickly. It is based on a fantasy and seems like it would be liberating, but it actually rewires the brain even with moderate use. Father O’Dell, who has a background in social work and psychology, says the brain’s pathways associated with pleasure become warped when used to seek out pleasure through use of pornography. It enslaves rather than liberates.

Emily Leedom, director of Marriage, Family and Respect Life for the diocese, compares what happens to the brain as it becomes addicted (in this case to pornography) to sledding down a hill. Each trip down the hill creates a deeper groove in the snow making the sled travel faster each time. As the groove deepens, it becomes much more difficult to veer from that path. You can’t get your sled out of the groove.

With addiction, the more you use the substance, the harder it becomes to escape the groove.

“When people watch pornography, there’s actually a hormonal trigger in the brain that’s bonding them to the person they’re seeing on the screen,” Leedom says. “So there’s a release of oxytocin that happens while people are viewing pornography and dopamine which is a bonding hormone. They’re actually sexually bonding to an inanimate object like a computer screen or a phone.”

Brain scan studies show that addiction to pornography operates in the same part of the brain where any other addiction operates, including addictions to alcohol, cocaine and methamphetamine. It also brings about the same behaviors such as withdrawal, self-absorption and anger. But Leedom says the fact that this is considered an addiction is actually a good thing.

“I think when we start to look at it through the addiction lens, there’s a lot of freedom because we start to recognize fictional Bob isn’t just watching pornography because he’s a bad person,” Leedom says. “It’s actually changing his brain. I think that unites us because instead of getting really mad at Bob, we get really mad at pornography.” 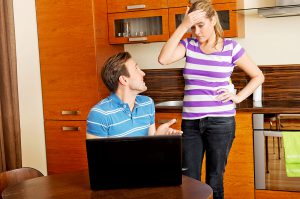 However, even through the lens of addiction, allowing pornography into a marriage can have devastating effects. According to Mary Weber, interim clinical director of Catholic Family Services, pornography appears to be about sexual pleasure, but it pushes out relationships, respect and connection—three things integral to true marital sexual pleasure.

“Pornography often generates secrecy, shame and disconnection,” Weber says. “It greatly contradicts the reality of human relationships which aren’t perfect and can be hard and messy, yet beautifully wonderful. It can destroy intimacy, and it defies the gift God gave to married people.”

Leedom says pornography interferes with the two integral ends of sex: unity and procreation. Pornography use pulls the spouses apart because the user is bonding to the images they see on their screen rather than to their partner in real life. And, creating new life is obviously not possible with a computer or phone. It leads to infidelity of the heart.

“When pornography is introduced, it’s a distraction away from the spousal relationship,” Leedom says. “It’s a pulling away. It’s a self-interested ‘I’m doing this thing for me and for me alone’ kind of thinking.”

But the real damage to a marriage is a deep sense of betrayal felt by the non-addicted spouse. Leedom says couples often struggle to put it into words, but they know sex is supposed to be set aside for each other only. Spouses want to be desired by each other and be seen as beautiful or handsome.

“When someone’s spouse is seeking out that sexual gratification in another place, there’s a wound that enters into the heart, often of women but also of men, that says I’m not enough for you. I’m not beautiful enough, desirable enough, attractive enough,” Leedom says.

Many times when women discover a pornography addiction in their husband, they express a feeling of disgust and a deep lack of trust. They will struggle with competing emotions of wanting the best for their spouse and helping them kick the addiction, but also with feelings of betrayal.

And worst of all, the addiction rarely goes away.

“Sometimes people are in a relationship where their marital relationship is not quite what they want it to be,” he says. “And so they look for some kind of boost, and obviously one of the ways the internet and society teaches you can do that is to get on and look at pornographic images.”

Of all the problems caused by a pornography addiction in a marriage, perhaps the worst is God being pushed out of the sacramental bond of the spouses. Leedom says many people struggling with this addiction feel restless and anxious. They aren’t at peace. They use their addiction to find temporary relief from their restlessness. They leave no space for God to heal the addiction and the marriage.

Thankfully, there is hope for spouses chained to a pornography addiction. Father O’Dell says it’s difficult to dislodge from the high of the addiction and will take a great deal of work and therapy and “just good old fashioned elbow grease to get to the bottom of it and get it rectified.”

Ultimately, the addicted spouse must choose to stop.

Break the chains, heal the marriage

In her experience counseling couples dealing with pornography addiction, Weber says an important place to start to heal is with honesty and admitting there is a problem—no lies and no justifications.

“They need a willingness to look in the mirror and admit this is an issue that is chipping away at what God wants for them as well as silently destroying their marriage,” Weber says. “Pornography addiction doesn’t have to be a forever part of a person’s story. God has so much more planned for their lives. The first step is surrendering and admitting there is a problem.” 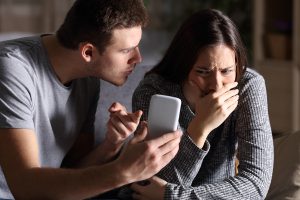 “We have to remember that humanity matters and to behold the person of our spouse is actually the great gift God has given us,” Leedom says.

Father O’Dell co-facilitates a chastity support group with Father Kristopher Cowles, pastor at Our Lady of Guadalupe in Sioux Falls. He suggests beginning work on healing the addiction by making sure all devices are protected by something like Covenant Eyes, which alerts an accountability partner or the other spouse when pornography is being viewed.

Next he recommends the addicted spouse limit their use of the internet altogether. This removes the temptation or the chance they might stumble upon a random image they shouldn’t see.

Since much of pornography is done in secret, Father O’Dell says he also recommends giving access to devices to their partner so they can confirm there is no use of pornography. They should also have access to the history in their device.

Weber says an accountability partner can be a valuable ally in the fight. This person can walk with the addict during their recovery, offer accountability and offer support during times of temptation.

Several programs are available to help achieve recovery. A great Catholic program, Reclaim Sexual Health, can be found at www.reclaimsexualhealth.com. Many other programs also exist online and can be helpful depending on the level of addiction.

If you would like to seek help locally, try the chastity support group with Father O’Dell and Father Cowles. You can learn more about it by contacting the parish offices of either priest.

Rebuilding the trust in the marriage can be one of the most difficult parts of recovery from pornography addiction. Father O’Dell says one key to getting trust back is communicating honestly and openly with each other. Don’t be afraid to admit when you’re struggling and ask for help.

Father O’Dell also has a warning for parents that relates to pornography addiction in marriages. Most addictions of this type start long before getting married, usually at a surprisingly young age. He says parents need to be ever vigilant to make sure their children are not accessing pornography on their devices. Monitor their usage and install an app like Covenant Eyes to protect them. This can help prevent this addiction from ever entering into their future marriages.

“It’s not an easy nor particularly pleasant task to try to help a young person stay away from pornography. But if we don’t, we’re just asking for huge problems down the road,” he says.

Let your faith guide you

Give your struggles over to God as you fight to recover from pornography addiction. Father O’Dell suggests frequenting the sacraments, especially confession. He and Leedom also suggest diving into the Church’s teaching about the human person in Pope Saint John Paul II’s “Theology of the Body” which lays out how we see human beings and human sexuality and the true gift they are.

Leedom emphasizes the mercy of God in this situation. Encountering His mercy in an abundant way will open the doors to healing.

“You’ll begin to see that you’re actually made for more than what you’re watching,” Leedom says. “The dignity of the human person is so much more than what you may be reducing it to. And there’s a flourishing and a hope and a desire for so much greater in relationship with God, because he reveals to us something far greater than we could have ever created for ourselves.”