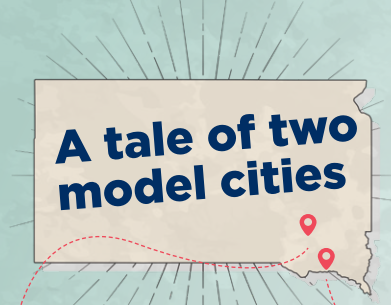 Community, unity of vision, and the best use of priests’ gifts and talents—these are qualities reported in areas of the Sioux Falls Diocese where a model with fewer pastors and more associates is being explored. Mitchell and Yankton are two of these “model” cities.

While all priests can say Mass and confer sacraments, a pastor is the one who is ultimately responsible to make decisions, next in line after Bishop DeGrood. “Associates,” sometimes called “vicars,” are priests who share in the ministry and duties of the pastor. They aid the pastor in making and executing decisions for the good of the people they are entrusted with.

The parishes of Holy Family and Holy Spirit in Mitchell are served by religious priests from the Pro Ecclesia Sancta Community. Father Cesar Valencia serves as pastor and Father Yamato Icochea serves as parochial vicar for both parishes. Pro Ecclesia Sancta means “for the holy Church.” Their charism is to live and promote holiness in the Church through work with families and youth.

Religious priests differ from diocesan priests in that they can serve in any diocese where a bishop accepts them. “Religious communities are very helpful to the Church,” Father Yamato said. “That’s how it’s been since the beginning—dioceses and religious communities working together in different but complementary ways, sharing charisms and gifts with each other.”

He points out that religious communities are a package deal, a family of brothers and sisters who help each other. One example is that twice a month the priest from the formation house in Sioux Falls assists the parishes in Mitchell.

In addition to having the Pro Ecclesia Sancta religious community presence, having one pastor and one parochial vicar allows Holy Family and Holy Spirit to share a common mission and the same way of doing things. The model also provides more opportunities for Catholics in Mitchell to share time together and get to know each other. While each parish has its own culture (working with the poor or evangelizing youth), coming together under one pastor allows them to share their strengths. “It allows us to be one big Catholic community rather than two competing parishes,” Father Cesar said.

The priests also benefit from knowing the whole Catholic community rather than those of just one parish. “Everywhere we go in Mitchell, we know all the Catholics,” Father Yamato said. “It is easier for pastoral work in taking care of the souls in the city.”

The main reason for combining two parishes under one pastor is the lack of priests; it’s a way to use available resources in a better way. Before combining under one pastor and one vicar, there were three priests in Mitchell, serving 1,400 parishioners in two parishes and a school. However, combining does not mean there is less work. For example, Father Cesar finds that all communication takes double effort to ensure both parishes and Father Yamato are always informed.

Challenges are faced and being addressed. Shared meetings and recreation are planned between the staff of both parishes who don’t often see each other. Uniformity in the ways of doing things can be challenging if one parish feels they are being asked to change to the way the other parish does things. And continuity with homilies due to alternating weeks can be another challenge. “Sometimes I forget what I said to each parish,” Father Yamato said. However, along with the challenge there is richness in getting the viewpoint of more than one priest.

“We are on the same page in everything that we do,” Father Yamoto said. “We know what to expect from each other when we’re in the same religious community. We work as a team. It would be difficult for two priests with completely different goals, but we have the same charism.”

“It’s an interesting model—I’ve been living it for about a year,” Father Tom Anderson said of being pastor of both Sacred Heart and St. Benedict parishes in Yankton, with associate priests Fathers Nick Haiar, Thi Pham and Bob Lacey. “I like it in the sense of having brother priests around. It’s been the best time of my priesthood, just being with men.” Thursday dinner meetings, joined by other deanery priests, are especially beneficial in promoting community.

“Sharing one pastor removes a lot of the challenges because one person makes decisions,” Father Anderson said. “This is especially important with a shared school system; unity of vision and purpose can make needed changes happen more quickly.”

In addition, there is stability of vision because the model leans toward pastors remaining in parishes six to 10 years while associates may be reassigned more often.

Father Anderson said the pastor needs to recognize each associate priest’s gifts and use them in ways that bring them joy.

“This model allows priests to be in roles that are life- giving, where they are comfortable and joyful,” he said.

Filling roles where they are gifted allows Father Pham’s genius for liturgical and community events and Father Lacey’s attentive listening and experience with the military to be shared with parishioners of both parishes.

Along with benefits there are also challenges. It can be more difficult for priests to make deep connections with all parishioners. Father Anderson uses the example of a priest who used to be present to all K-12 students. Now one priest may be better at connecting with elementary students and another with high school.

“It takes a lot of humility on our part to say ‘as long as someone is being Christ to those people, it doesn’t have to be me.’ It’s an adjustment,” Father Anderson said. “There can be a temptation to be jealous of my brother priest, because I might see a group of people connecting to him instead of me. That gets resolved by taking it to prayer and recognizing that whatever good my brother priests do for the Lord is good for me and good for the Church.”

Pastors of more than one parish also face the challenge of delegation.

“We priests are tempted to do it all, but we can’t,” Father Anderson said. “Imagine going from 1,000 families to 2,000—it’s simply impossible to do what you used to do or to do it in the same way. If a priest isn’t able or willing to delegate, he will burn out.”

Delegation requires a lot of humility and focus. “I no longer can do what I used to do, and I have to let go of some things,” Father Anderson said. “It’s important for me to spend time building fraternity with associates instead of going out and having meals with families. I have had to die to myself because I like going to dinner with families.”

“One of the jokes between priests is that they didn’t realize how good they had it as associates,” Father Anderson said, adding that there are two types of priests who may want to be associates: young priests who aren’t ready for a pastorate and experienced priests who need a rest from administrative duties.

Back to the beginning

While we can see this model at work in the urban settings of Aberdeen, Mitchell and Yankton, it may look slightly different in rural areas or areas where rural and urban parishes may be connected by a pastor and associate priests. However, we can look to our biblical roots to see the beginning of this model.

“The precedent is very clear in the Book of Acts,” Father Anderson said. “The apostles looked around and wondered, ‘Why are we doing this when there are other people who can? It’s better for us to focus on the Mass and the word.’ That’s how deacons (which means ‘servants’) came about. There was a delegation of authority, talents and responsibilities right from the very start of the Church.”

The example of the Twelve Apostles is a good model to follow. Let us be open to the possibilities just as they were. 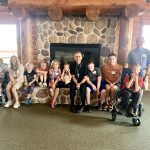