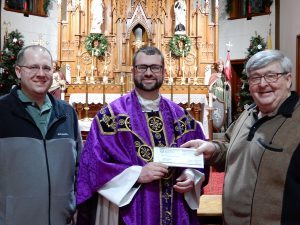 The First Catholic Slovak Ladies Association (FCSLA) awarded one million dollars in donations to qualified programs/projects which comply with keeping the vision of the Association. Donations were
awarded during the 42nd Quadrennial Convention in October in Tampa, Florida.

St. Wenceslaus Catholic Church of Tabor, South Dakota was the recipient of one of the donations given at the convention. Father Anthony Urban, center, pastor of St. Wenceslaus Catholic Church in Tabor, receives the Donation check from FCSLA National Auditor Dennis L. Povondra on the right and FCSLA
Branch W093 member Mark Povondra on the left. A donation was also received in 2015 and both donations were and will be used for upgrades and repairs to the Catholic school building and the Catholic church in Tabor.

FCSLA with over 110,000 members in the United States is a fraternal benefit society that ranks among the top fraternal societies active in the United States today. Since the societies founding in 1892 in Cleveland, Ohio, FCSLA has grown to provide licensed financial products in 48 states and Washington, D.C. Membership and its benefits are available to all Christians who are US citizens. FCSLA purchased the former Catholic Workman fraternal benefit society and all the Catholic Workman members are now governed by the First Catholic Slovak Ladies Association.

Tabor Branch W093 had previously received FCSLA Matching Funds Grants for a soup kitchen benefit for one of its member medical expenses, a donation for the annual Rich Schild memorial fireworks display on Czech Days, and for Beseda Hall for repairs and upgrades at their annual family fun night New Year’s Eve gathering. Scholarships have also been received by the branch youth members from Elementary through College. The Tabor Branch has been fortunate to have had four of its members receive the National Fraternalist of the year award from FCSLA.

The primary concerns of the First Catholic Slovak Ladies Association are: Insurance Benefits, Caring for Others, Involving Young People, Patriotism, and Branch Meetings. FCSLA offers modern life insurance protection at attractive premiums for the entire family. This caring for others is expressed by visiting the sick, assistance in time of disaster, helping needy members, and by many other methods that say we are brothers and sisters trying to follow Christ's examples. Involving our young members with scholarship programs, a variety of contests (such as photo, essay and art), Christmas parties, and Join Hands Day activities keeps our youth members involved.

The FCSLA motto is, &quot;For God and Country” and is part of all meetings and programs. With over
400 branches across the United States, FCSLA members meet regularly to socialize, plan special projects and elect officers. FCSLA may be visited at: www.fcsla.org.

We journey together during the Synod on Synodality 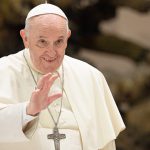 We journey together during the Synod on Synodality

December 1, 2021
Do something radical during Lent this year 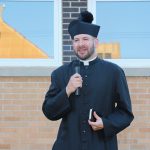 Do something radical during Lent this year