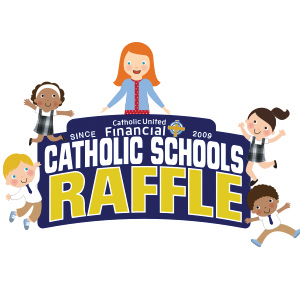 The students, parents, teachers and staff of St. Lambert Elementary are grateful to the Sioux Falls community for helping them achieve fundraising success through the 2020 Catholic Schools Raffle program. The school met their $12,000 goal through the program in ticket sales and donations.

From January 17 to March 1, students at St. Lambert sold raffle tickets at $5 each to raise funds for their school. Costs to run the raffle are provided by sole sponsor Catholic United Financial so every dollar raised by ticket sales stays with this school.

The fundraiser came to an official close on March 12 with the prize drawing ceremony during which winners of $40,000 in prizes, from gift cards and vacations to a new Buick Encore SUV, were announced by guest emcees Super Bowl Champion Matt Birk and Miss Minnesota 2019 Kathryn Kueppers.

When St. Lambert’s total is added together with the other 88 participating schools in Minnesota, North Dakota and South Dakota, the 2020 Catholic Schools Raffle raised more than $1.3 million—a new annual record for the program—and a cumulative total of $9.8 million since the program began in 2009.

“All the credit goes to students, families, and parish and school staff, and the wonderful communities that support them,” said Harald Borrmann, president of Catholic United Financial. “It is an honor for us to show our unconditional support of Catholic education through this program year after year.”

Based in St. Paul, Minnesota, raffle sponsor Catholic United Financial provides all the prizes and promotion materials for the raffle resulting in 100 percent profit for the schools.