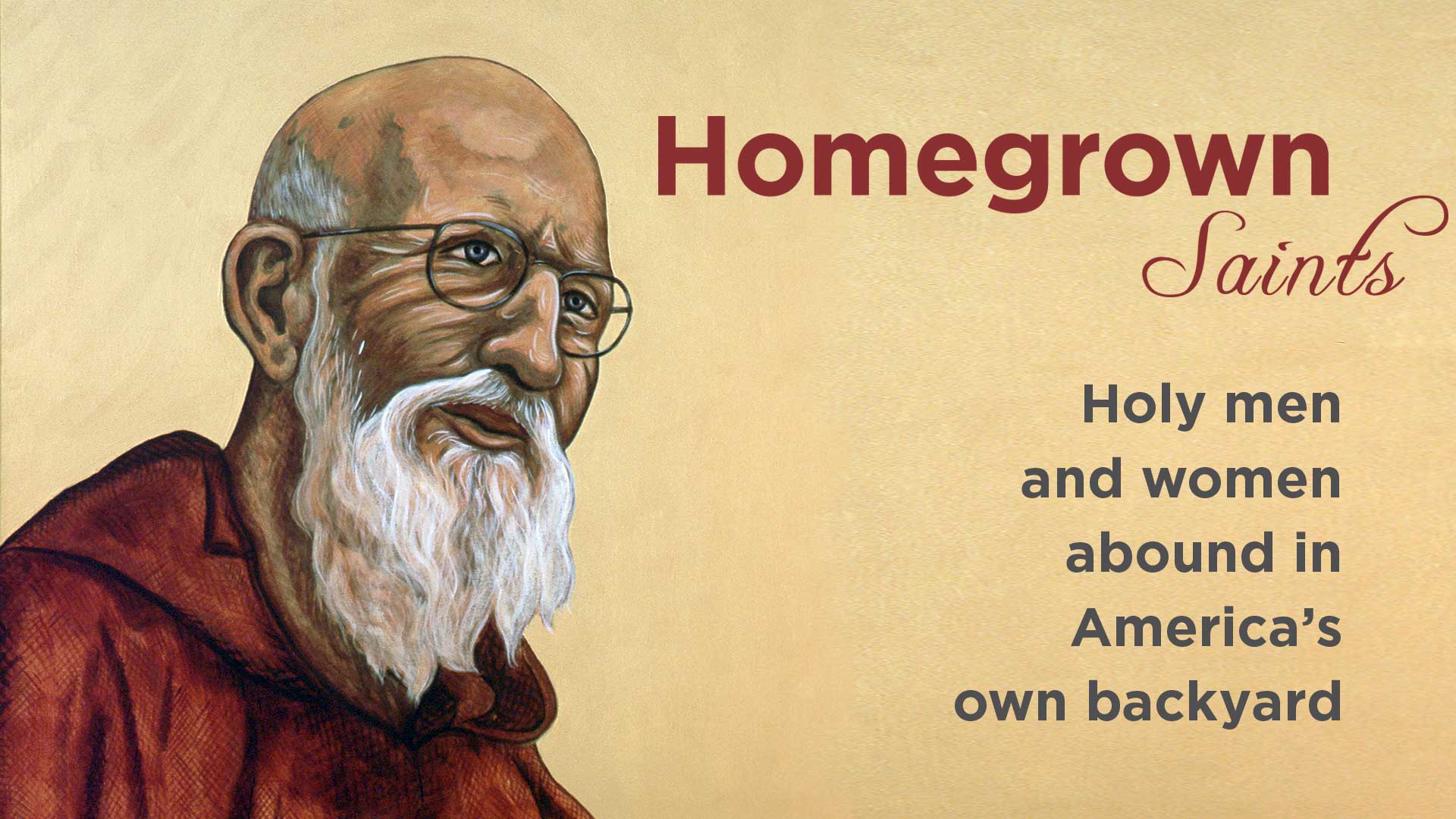 Have you ever had a really good friend who was with you through a difficult time?

They comforted your sorrow. They held your hand when you hurt. They prayed with you and prayed for you.

In today’s scattered world, we all need these good friends in our lives. Did you know you have thousands of these friends waiting to accompany you through life’s challenges? They lived similar lives in many cases. They came from similar places. They felt many of the same sorrows.

All you have to do is call their name. And each name starts with one word: saint.

Saints in our American backyard

This month we celebrate and honor our friends in heaven with All Saints Day on November 1 and all the faithful departed with All Souls Day on November 2. It’s easy to look at the many saints and think they have nothing in common with us and can’t help us. Most of them came from far-away places and distant centuries.

But don’t overlook the growing list of our own homegrown saints who came from cities and small towns right here in America. They share our experiences of life, our concept of freedom, our independent spirit. They could have been any one of us.

You can see easy proof of this in the list of saints and those making their way through the process of beatification and canonization to become saints. We have many great examples to help us through our everyday lives.

Monsignor Charles Mangan loves to share his extensive knowledge of the saints. He believes saints close to home can make a difference for the rest of us.

“As Americans, we love our country. We love our church,” Monsignor Mangan says. “We don’t see any contradiction between being faithful to our country and faithful to the Church. As a matter of fact, we see them as complementary.”

He reminds us that holiness is not a privilege of the few or of a geographic area, but holiness is for everyone. Seeing more saints canonized in the U.S. helps us feel like we can do it, too.

“It’s important for us to have people who we can relate to who are not distant from us in terms of our geography, but who lived the same many aspects, the same kind of lives that we’ve lived— the same experiences as Americans,” Monsignor Mangan says.

Monsignor Mangan says we shouldn’t be fooled into thinking that somehow it’s different now—that we don’t have to seek holiness in modern times. Holiness is a call for all times and places. Even when our creature comforts seem to consume us, we have to find ways to resist them and choose the narrow path.

“I think the pull of society is so hard, not only for lay people, but also for priests and religious,” Monsignor Mangan says. “It’s so simple to become addicted to television, traveling, things that are not necessarily evil in themselves, but if they take up too much of our time, we’re not available. Our hearts are so fixed on who’s in the latest movie or who was in the latest ballgame that we almost are preferring that over our duties.”

How can the saints help us? Monsignor Mangan says they’re always helping us by praying for us and interceding for us in heaven. They see us struggle with many of the same things they struggled with in their own lives. They can accompany and support us on our own journey to holiness and hopefully sainthood.

He says the key is to always ask, “To what am I called?” And then lean on the saints and the Lord to help you answer that call.

The process of declaring a saint

You’ll notice throughout this story several lists of Americans and those who came to America who are now going through the process of being declared an official saint of the Church. It’s a complicated process that can take many years. Here’s a brief explanation of the steps they have to move through.

The first step begins at the diocesan level after a petitioner from members of the faithful of the diocese presents a request to the bishop for an inquiry, or the bishop can initiate the inquiry himself. If the bishop finds merit in the petition, he then gives permission to open an investigation through the diocese into the life of the individual. Typically, none of this can begin until at least five years after the person’s death.

The individual’s virtue during their life is examined by looking at their writings, speeches, sermons and eyewitness accounts. Once sufficient evidence of their holiness in life has been collected, the individual is given the title “Servant of God” and the cause is advanced to the Congregation for the Causes of the Saints of the Roman Curia (the Congregation).

At this point, permission is given to exhume and examine the body of the Servant of God, and relics are taken and preserved.

Now that all the evidence they lived a life of heroic virtue has been collected, the Congregation recommends to the pope that he should proclaim them Venerable. This means the Servant of God displayed to a heroic degree the theological virtues of faith, hope and charity and the cardinal virtues of prudence, justice, fortitude and temperance.

Once this proclamation happens, the faithful can be encouraged to pray for the next step to occur: a miracle brought about as a sign that God wills this person to be canonized a saint.

Beatification, the statement that it is worthy of belief that the person is in heaven, has two possible paths:

After the title of Blessed is given, a feast day is assigned. Observance of the feast day is permitted only in the Blessed’s home diocese or locations associated with them.

To be canonized a saint, a martyr must have interceded in the occurrence of at least two miracles, while a confessor needs just one more miracle since one will have already occurred to be named Blessed.

When the Church canonizes a saint, they are saying that person is certainly in heaven enjoying the Beatific Vision. It is a gift from God alone.

Their feast day can now be celebrated anywhere and the faithful can honor that saint.

Now that we know how someone becomes a saint, let’s take a look at a few Americans on the path to recognized holiness.

Servant of God Nicholas Black Elk should be a familiar name to many in South Dakota. He was a medicine man from the Oglala Lakota (Sioux) tribe. He fought with his second cousin Chief Crazy Horse to defend their territory at the Battle of Little Big Horn in 1876, and he was injured at Wounded Knee. The former Harney Peak in the Black Hills was recently renamed after Black Elk.

His journey to the Catholic Church began after he married Katie War Bonnet and she became Catholic. All three of their children were baptized in the Church. After Katie died, he became Catholic as well in December of 1904 on the feast of St. Nicholas. He later remarried a Catholic widow with two children, and they had three more children together.

Black Elk became a catechist in the Church and collaborated with Jesuit missionaries to evangelize the reservations. Over the 46 years of teaching the faith, he played a key role in the conversion of some 400 people. He died August 19, 1950.

The Diocese of Rapid City opened his case for canonization in 2017. To learn more about Black Elk’s life and his cause, visit rapidcitydiocese.org/black-elk-cause.

Born in New Orleans in 1813, Venerable Henriette DeLille was a Creole free woman of color. She was drawn to a life of service after teaching in a Catholic school where she cared for and educated the poor.

In 1836, Henriette founded an unrecognized order of nuns who cared for the sick, helped the poor and educated free and enslaved children and adults. A year later the order was formally recognized and named the Sisters of the Holy Family. They took in elderly who needed more care than only a visit could provide and started the first Catholic home for the elderly in America.

Mother Henriette died during the Civil War in 1862 at 49. Her friends say her death was due to a life of service, poverty and hard work. The order she founded has more than 300 members today and operates schools, nursing homes and retirement homes in several states in the U.S.

She was named Venerable March 27, 2010. Several miracles are currently under medical scrutiny that could elevate her to Blessed. Visit sistersoftheholyfamily.com/henriette-delille to learn more about this courageous woman.

Blessed Stanley Rother was a priest in various parishes in his home state of Oklahoma during the 1960s. He requested to be assigned to a mission church at Santiago Atitlan in southwest Guatemala in 1968. He learned Spanish and the language of the indigenous people so he could become closer to his congregation.

The people he ministered to were quite fond of him. He founded a small hospital in the area and translated the New Testament into their indigenous language. By 1975 he had become the leader of the mission effort in Guatemala.

During the last year of his life, violence increased in the area. Catechists and parishioners would often disappear and later turn up dead, but he refused to leave his congregation at first. After he found out his name was on a death list, he returned to Oklahoma for a few months at the beginning of 1981.

Father Rother returned to Guatemala in time to celebrate Easter with his congregation. During the next couple months, he knew he was being watched. On July 28, 1981, gunmen broke into the rectory and shot Father Rother. He was one of 10 priests murdered in Guatemala that year.

In December of 2016, Pope Francis confirmed Rother was killed “in hatred of the faith” and pronounced a martyr. He was beatified September 23, 2017. He is the first martyr from the United States. To learn more about Father Rother, visit archokc.org/stanleyrother.

Sister Thea Bowman was born in 1937 in Yazoo City, Mississippi. Although she was the granddaughter of slaves, her father was a doctor and her mother was a teacher. Raised a Methodist, she converted to the Catholic Church with her parents’ permission at the young age of 9. She later joined the Franciscan Sisters of Perpetual Adoration in Wisconsin.

Thea helped the Church take major steps in its ministry to African Americans. She was an evangelist among her own people, helped produce an African American hymnal, and helped found the National Black Sisters Conference. Her dynamic personality and amazing singing voice made her a popular speaker and inspiring spiritual leader.

Servant of God Sister Thea Bowman died of cancer on March 30, 1990, at 52. Her cause is being investigated by the Diocese of Jackson, Mississippi. To learn more about her fascinating life, visit sistertheabowman.com.

Even Americans can be saints

As you can see, many Americans are making their way along the path to canonization as saints. Their stories are varied and amazing. The lists you see with this story contain great examples of waiting friends that we as fellow Americans can meet and grow close to. Find one who speaks to you and let them accompany you in your journey to join them in heaven.