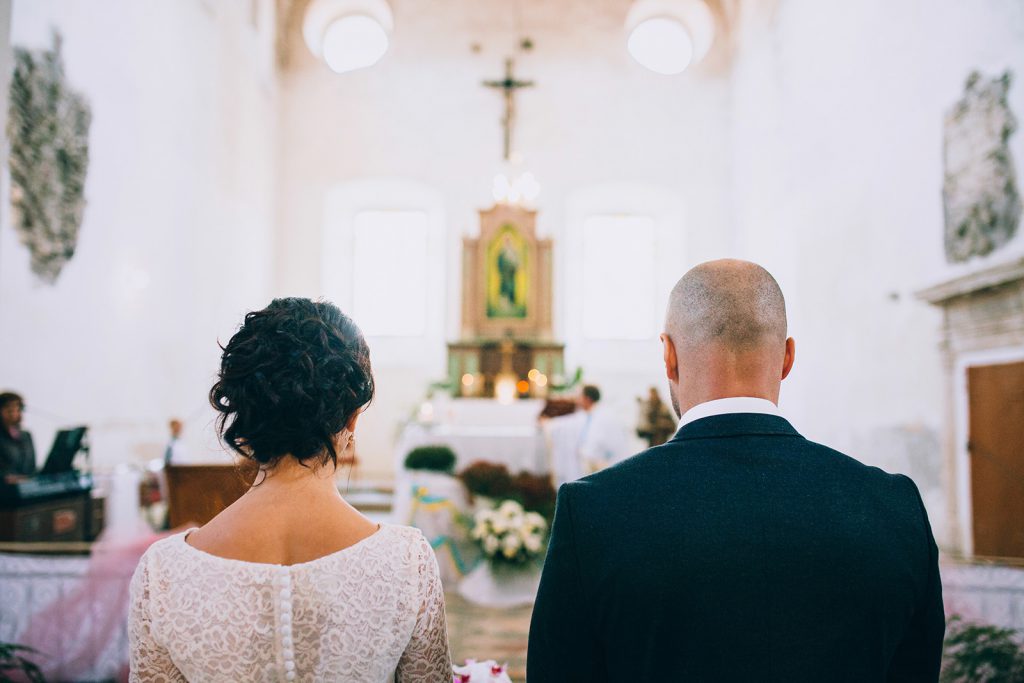 The Catholic Church holds that Christian marriage is a holy covenant that binds unconditionally for life. Certain elements are essential to establish this covenant. Consequently when an annulment is sought from the Marriage Tribunal, one of the parties is alleging that one or more of these essential elements was not present from the very outset of the marriage. The parties participated in the wedding ceremony but they did not establish a sacramental marriage.

For more questions or more information

It has been the experience in the Diocese of Sioux Falls that the best place for the faithful to begin their journey with the marriage nullity process is by meeting with their local parish priest or deacon.

All priests and deacons are supplied with the forms and application materials, and your priests or deacons can work with you to explain the initial steps in the process, to properly complete the forms and assemble the prerequisite documentation and information, and can generally accompany you in discerning if starting a marriage nullity case is the right step for you

What is a Tribunal?

The Tribunal is established by canon law as the judicial office and court system of the Church. The majority of its work involves resolving questions of marital validity; however, the Tribunal works with other sacramental matters, as well. By interpreting and applying the laws of the Church, it protects the rights of all the Christian Faithful.

What is an annulment?

Annulment” is an unfortunate word that is sometimes used to refer to a Catholic “declaration of nullity.” Nothing is made null through the process. Rather, a Church tribunal (a Catholic Church court) declares that a marriage thought to be valid according to Church law actually fell short of at least one of the essential elements required for a binding union.

How do I begin the process for a declaration of nullity?

Contact the priest or deacon of your parish; if you are not Catholic, contact a Catholic priest or deacon where you live or in the parish of your future spouse.  An appointment will be scheduled at which you will be assisted with the application process.  You will be asked to write a thorough history of your former marriage, and to obtain documentary evidence of your baptism, marriage, and divorce.  When this has been completed, these materials will be forwarded to the Marriage Tribunal.

When can a date be set to marry?

No parish priest is free to help you schedule a wedding (or a Catholic ritual for persons who have already married in a civil ceremony) until after the entire Declaration of Nullity process is completed, including any counseling requirement.  The Tribunal cannot guarantee the exact time period required for this process, nor can anyone presume that the process will lead to a declaration of nullity (an annulment).  It is important to note that every marriage is presumed to be valid and binding, unless conclusive proofs to the contrary are produced.

Does a declaration of nullity mean there was no marriage?

No. It means that a marriage that was thought to be valid was in fact not valid according to Church law. A declaration of nullity does not deny that a relationship existed. It simply states that the relationship was missing something that the Church requires for a valid sacramental marriage.

Who may apply for a declaration of nullity?

Either party to the marriage whether Catholic or non-Catholic can submit an application to a priest or deacon and request that their marriage be examined for nullity. However, before the Church can consider a case, it must be clear that there is no possibility for reconciliation between the parties. A civil divorce is considered sufficient proof that the parties cannot be reconciled.

Does a declaration of nullity have any civil effects?

The declaration of nullity does not have any civil effect in the United States on the parties. Rather it frees both parties to receive the sacrament of marriage again in the Catholic Church.

Are the children ever considered illegitimate?

No. A declaration of nullity has no effect on the legitimacy of children. Parental obligations remain after a marriage may be declared null.

How long does this entire process take?

Cases vary according to the time it takes to contact persons involved, and the number of cases pending before the Tribunal at any given time.  Church law requires that cases not be delayed unnecessarily.  The Tribunal of the Diocese of Sioux Falls usually completes a case in twelve months.

Are there any other requirements?

If a declaration of nullity is made, (an annulment is declared), that does not mean a person is free and ready to have a marriage witnessed in the Catholic Church.  Some marriage studies bring to light personality issues in one or the other party that caused serious relational problems, and that do not appear to be resolved.  If left unattended, these issues can be anticipated to cause similar problems in another marriage.  In such a case the judges will require this person to receive appropriate counseling.  This must be satisfactorily addressed before a marriage can proceed.

Who can be asked to serve as a Witness?

Family members and lifelong friends along with individuals that were present during the courtship or were in the wedding party are to be named as Witnesses. The Petitioner should seek permission from Witnesses and verify their address before naming them.

Specifically excluded by Church law are confessors. In general, the tribunal does not accept adolescent or adult children of the parties, a current civil spouse or a prospective spouse of either party to offer testimony. The Petitioner should seek permission from Witnesses and verify their address before naming them.

What is the role of a Witness in the marriage nullity case?

A Witness is a person who can provide the tribunal with information about the Petitioner and/or Respondent’s family background, childhood, adolescence, courtship and time leading up to the wedding, the marriage itself, and the reasons for the break-up of the marriage. Your case will be delayed if proper witness testimony is not received.

Is the testimony kept confidential?

If a negative decision is given, can another petition be submitted to the Tribunal?

This is a possibility that requires you to contact and work closely with your priest/deacon and have them consult the Tribunal to determine what is the best way for you to proceed.

Is infidelity a ground for a declaration of nullity?

No. If the couple’s marriage was valid on their wedding day, nothing that happened later in the marriage-not even adultery-nullifies it. That said, infidelity may indicate, but not always, that one of the parties to the marriage entered without the proper intention that the Church requires for a valid sacramental marriage.

Common Misconceptions about Declarations of Nullity

Can you receive the sacraments if you are civilly divorced?

Does everyone who applies for a declaration of nullity receive an affirmative decision?

No, Tribunals do give negative decisions. The burden of proving the marriage was invalid rests on the Petitioner, the person who applies for a declaration of nullity. The Catholic Church presumes that every marriage is a valid union, and there must be sufficient evidence for declaring otherwise.

Does my former spouse have to agree to a declaration of nullity?

Is a declaration of nullity a ‘Catholic Divorce’?

Additional Reading on Declarations of Invalidity

USCCB For Your Marriage: Teaching on Annulments
http://www.foryourmarriage.org/annulments/

Our Sunday Visitor: Is an annulment just a Catholic Divorce?
https://www.osv.com/Article/TabId/493/ArtMID/13569/ArticleID/11462/Is-Annulment-Just-Catholic-Divorce.aspx