WASHINGTON (CNS)—The theology of the body is not just suited to high school classrooms. Even 4-year-olds should have the opportunity to learn about St. John Paul II’s teaching on life, love and human sexuality—at least in part. Molly Meyer, a curriculum design specialist, gave a presentation July 24 on Ruah Woods Press’ proprietary K-12 supplementary […]

VATICAN CITY (CNS)—Pope Francis urged Syrian President Bashar Assad to put an end to his country’s eight-year-long conflict and seek reconciliation for the good of the nation and its vulnerable people. “The Holy Father asks the president to do everything possible to put an end to this humanitarian catastrophe, in order to protect the defenseless […]

WASHINGTON (CNS)—A group of 35 teachers from Catholic middle and high schools around the country went back to school briefly this summer to learn how to better approach anti-Semitism and the Holocaust in the classroom. In its 24th annual summer conference, Bearing Witness—a partnership between the U.S. Conference of Catholic Bishops, the National Catholic Educational […]

WASHINGTON (CNS) — Pope Francis has accepted the resignation of Bishop Richard E. Pates of Des Moines, Iowa, and named as his successor Father William M. Joensen, a priest in the Archdiocese of Dubuque, Iowa. The resignation and appointment were announced July 18 in Washington by Archbishop Christophe Pierre, the Vatican nuncio to the United States. […] 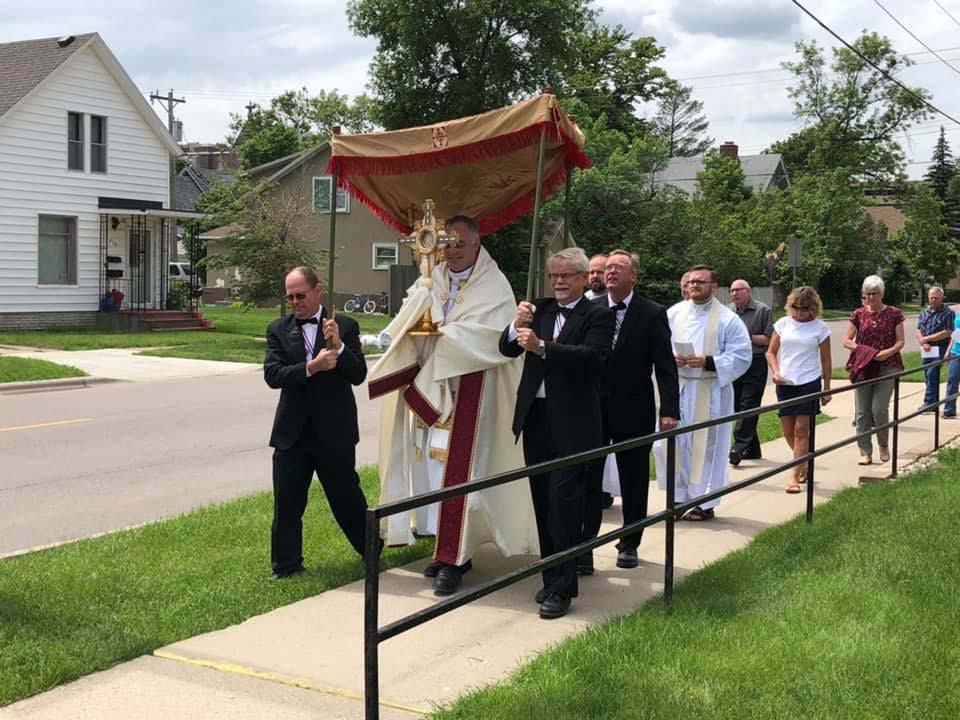 The Aberdeen Catholic community celebrated their 25th year of Perpetual Eucharistic Adoration at their annual Eucharistic Procession on Corpus Christi Sunday. It was followed by a social event at Sacred Heart parish hall.  (picture furnished by David Vetch)

July 19-20 – Located at St. Benedict Parish, Yankton, participants can expect to ‘Experience the healing love of God’ in a retreat led by Oblate Fr. Richard McAlear beginning at 7 p.m. on Friday with an opening Mass and conference. Saturday will consist of a series of talks, reconciliation and prayer ministry concluding Saturday evening […]

Sunday, July 21 – Come test your skills in a Trap Shooting Tournament hosted by the Knights of Columbus Council 16802 at the Izaak Walton League in Sioux Falls. Warm up starts at 11 a.m. with registration and lunch at noon followed by a safety meeting. Shooting begins at 1:30 p.m. Price is $100 per […]

WASHINGTON—In June, the National Religious Retirement Office (NRRO) distributed $28 million in financial assistance to 360 U.S. religious communities to help underwrite the care of aging members. The funding is made possible by the Retirement Fund for Religious collection, an annual, parish-based appeal benefiting some 30,000 senior religious and their communities. The latest appeal was held in […]

Tuesday, July 2 – Office of the Marian Apostolate will sponsor the recitation of the rosary in the Mother’s Garden near the Cathedral of Saint Joseph, Sioux Falls, at 6 p.m.