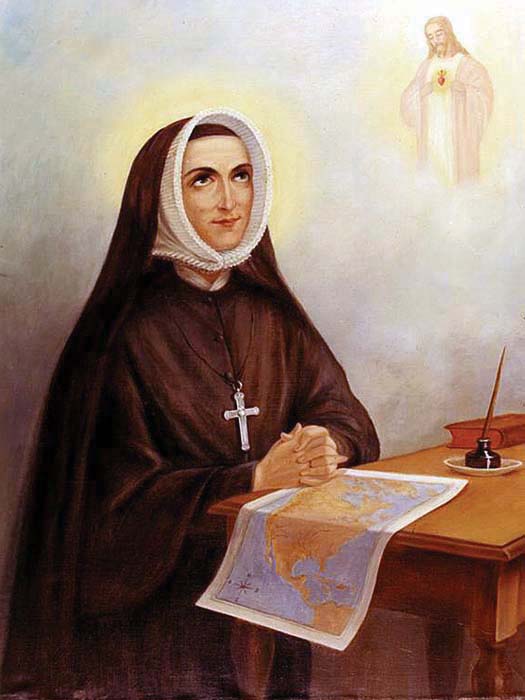 You get a sneak peak! “Can we be saints?” is a new series that will be launched on this website this month. Regularly, we’ll introduce you to a saint in a new way, not with just a boring old bio. We’ll show you how saints struggled and lived very much like we do today. They’re more like us than we could ever imagine. Click here to see more stories of how our lives and saints lives intersect.

Have you ever had to wait a long time to get something you really wanted in life? Maybe you’ve waited a long time to meet your ideal spouse, and the wrong people keep sending you off track. Or you can’t seem to land that job you’ve been working toward for years.

The road blocks keep popping up. The waiting drags on.

Saint Rose Philippine Duchesne faced the same problems. She’s probably not a saint you’ve heard of before, but she overcame road blocks and waiting in her own life. And maybe she can inspire you to face them head on in yours.

While growing up in Grenoble, France, in the late 1700s, Rose felt called to enter the religious life early on, but her father objected. She tapped into her strong will and desire to serve God to overcome that road block and entered the convent of the order of the Visitation of Holy Mary when she turned 18.

Unfortunately, the revolutionaries of the French Revolution’s Reign of Terror closed or suppressed all religious houses. Dejected and likely terrified, Rose went back home and tried to live out her vows for the next 11 years. She helped others suffering from the ravages of war and even those imprisoned at the former monastery during this dark time in France’s history.

After I graduated from college, I worked for a daily newspaper for about a year. I quickly figured out the life of a newspaper reporter wasn’t for me, but I still loved writing. I moved and couldn’t find a job as a writer. This was my first road block to my calling. And I’m sorry to say, I didn’t choose my next steps very well.

Rose struggled too. Post revolution, she tried and failed to revive the monastery because the living conditions were just too harsh to keep it going. She accepted an offer in 1804 to merge with another religious community, the Society of the Sacred Heart. Now she was getting somewhere. She became a superior and supervised a school in the new convent in Paris.

All through her life, a desire to serve Native Americans in the New World grew in Rose, but she couldn’t figure out how to accomplish that goal. It would be 13 more years before she would get her chance. Talk about waiting!

I waited almost 20 years to start my journey back to writing. Those years weren’t wasted though. I learned a lot about myself and my abilities. I explored new career paths very different from writing. But none of those careers seemed to really fit. I was tired of flopping around, not knowing what was next.

Rose did a lot better than I did during her waiting, but she waited nonetheless. Finally in 1817, the Bishop of the Diocese of Louisiana and the Two Floridas, William Dubourg, visited the convent in Paris. Rose’s dream seemed within reach. Bishop Dubourg was looking for educators to come to America to evangelize the Native American and French children of the diocese. She begged her superior for permission to serve and was finally granted it.

Rose left the next year at age 49, traveling by sea for 10 weeks to reach New Orleans and then on a steamboat up the Mississippi River for seven more weeks to arrive in St. Louis. Here, another road block was erected. Rose would not be assigned in St. Louis as expected. She was needed instead in St. Charles, Missouri, a remote village on the frontier.

Can you imagine her disappointment? Just when she thought she was going to fulfill her heart’s desire, the Lord asked her to wait again. And this time, the road block almost did her in.

In St. Charles, she founded the first house of the Society of the Sacred Heart outside of France, but the harshness of the frontier was nearly too much for her. Extreme cold, hard work, lack of money and difficulty with communication made things more difficult than even a tough woman like Rose expected.

My conditions were also getting tough. I had been running a home staging business for about seven years. The problem? I wasn’t getting any traction. I felt busy, but I wasn’t making any real money. I had to face the fact that I needed a new job, one that would pay me a regular salary so we could pay the mortgage. It was a difficult realization, but you do what you have to do. In my case, I got a job as an administrative assistant at an accounting firm.

For Rose, the conditions she and the other sisters faced eventually forced them to relocate to Florissant, Missouri. The new location was a vast improvement. By 1828, the sisters had grown their work to six communities and several schools for the young women of Missouri and Louisiana. Although Rose was accomplishing much, she was still waiting. Her opportunity to fulfill her long-held desire to serve the Native Americans would soon present itself.

Think of the patience this must have taken for Rose. All these years, she served faithfully where ever she was called, even when it wasn’t what she wanted. Sound familiar?

Maybe we don’t always serve so faithfully, but we can. And the Lord will always lead us down the path we’re supposed to take if we listen to His promptings. It’s so hard to see while we’re traveling it, but He’s there.

I knew He was there when my opportunity to get back to writing turned up just around the corner as well.

I started taking writing classes to polish my skills while working the administrative assistant job. After a few years, I knew I had to find a way back to writing as my full-time job. I applied for writing work, but no one would give me a chance because I had been out of the business for too long. Another road block.

This time I didn’t let the road block stop me. I started my own freelance writing business on the side, working with businesses to write their marketing materials. I picked up clients and had some work. I knew I would have to wait a while before I could quit my day job (there’s that dreaded waiting again). But suddenly, the Lord intervened, quite literally it seemed.

“Profit by the little trials that come to you, for through them we make real progress.”

In 1841 at age 72, Rose was retired and frail, but when the call finally came to serve the Native Americans, she would accept it happily. A Jesuit priest at the mission in Sugar Creek, Kansas, requested Rose and three other religious sisters to come start a school for Potawatomi girls.

Though her health was her final roadblock, she did what she could for the fledgling school. She spent most of her time in prayer for the students and those running the school, becoming known as “Woman Who Prays Always.” After only a year, she was sent back to St. Charles because of her poor health, but she had finally done the one thing she longed to do.

As for me, my husband happened to notice an ad in our Sunday bulletin for the position of managing editor/writer for our diocesan publication, The Bishop’s Bulletin. I figured it couldn’t hurt to apply.

Thankfully, my soon-to-be boss was able to do what so many others couldn’t do in the past: look at my resume and see me as someone who could use all my varied experiences (previously road blocks) to do the job. I believe the Lord stepped in.

All those years while I felt like a failure for floundering in my professional life were necessary to bring me to this place, this job, this calling.

Interestingly, Rose felt at different times during her service that she had failed, too. She once said about her work soon after arriving in St. Charles, “…the dear Lord has favored us with a share of His cross. The greatest and undoubtedly the hardest to bear is the lack of success in our work here. If a saint had been in charge, all would have gone well.” Little did she know that a future saint was indeed in charge.

When the world puts road blocks in your way and the waiting seems too much to bear, remember that God has a plan for you. My own experience has borne that out over and over. I don’t usually know where I’m being led, but suddenly something will happen that brings the journey I’ve taken so far into sharp focus.

Am I comparing myself to a saint? No way. But as you can see, the saints faced many of the same challenges we do. They found a way to serve the Lord in all kinds of adversity.

We all have a long way to go to be holy. But we’re all called to try. And we have to trust the Lord. Difficult, I know. Even for those who become canonized saints.

Keep pressing on. The road to holiness is possible for each of us, and Rose has some final encouragement to help.

“We may not understand His Will for us in time, but in eternity the veil will be drawn and we shall see that He acted only for our happiness. Let us bear our cross and leave it to God to determine the length and the weight.”